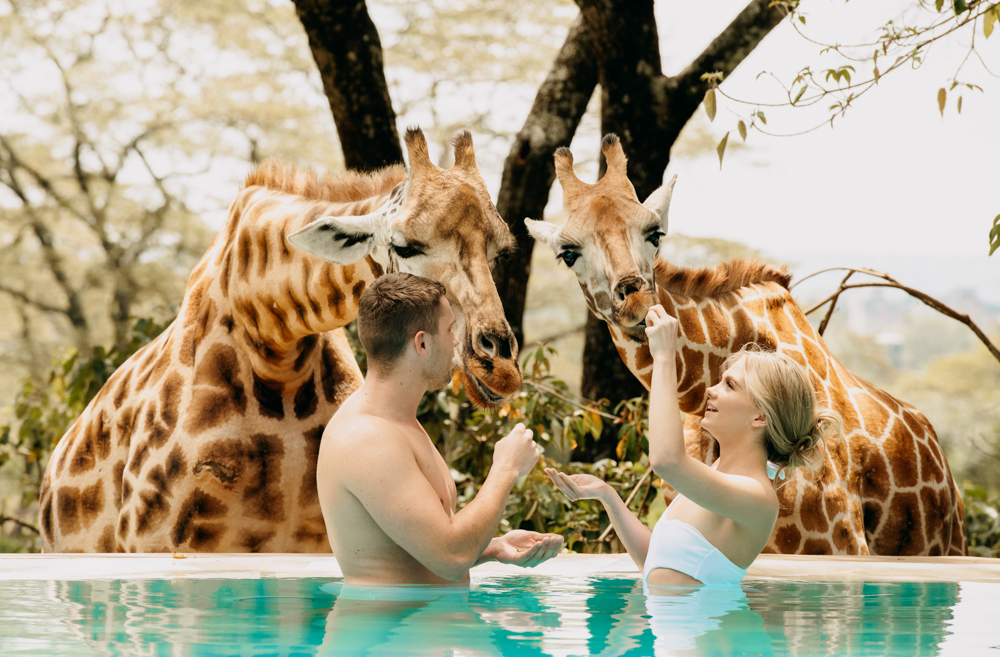 Giraffe Manor. Really… what more can I say about this place?! It is so stunning and even more than what you see online. Having seen this venue a number of years ago, I have seen some of the best photographers photograph here and bloggers. So when the project came up to go with Emma and Kieran to Kenya I was more than on board then I could ever be! This project got postponed a few times due to the travel restrictions but this year it finally happened. Since the first postponement they actually built in a new area for day rooms and the amazing spa and pool. The work Giraffe manor does with the endangered Rothschild Giraffe and the giraffe centre is amazing- go check out how you can support their cause!

I think the pool couple photos were some of my favourite moments. After we have checked in, we decided to head straight to the pool not thinking anything of the giraffes at this point as they are over at the giraffe centre mainly during midday. So just though this would be the quietest point in the day as people would still be checking into their rooms rather than heading straight to the pool. Now this was probably where i self praise far too much! As this was THE BEST decision I made. Not only did we have the pool area fully to ourselves we got not 1 but 2 giraffes come over. I was actually about to say the shots were done and then just enjoy the pool and head out for lunch when they came over. First was the mum Betty, who is also pregnant- a little shy and protective of her belly and the oldest female at 17 years old. Followed by Lilly her daughter. It was so so lovely to have them both her feeding from their hands with the reflections in the pool. One of the staff came over to help with the interaction and it was truly magical. We had this experience fully to ourselves. Normally ti is 2 guaranteed interactions with the giraffes here at the manor- so it was to our delight we got this interaction so early into our stay.

We then had lunch and proceeded with bridal prep. Getting ready and Kieran helping Emma into her outfit.

It was then the fun stated. After doing private vows and having a moment together. We then waited for the giraffes to come for afternoon tea. What followed was an amazing experience with the giraffes and I even got in for a few photos of my own to commemorate the trip. Each of the staff at the manor tell you which giraffes you can get closer with and which ones you should give a little bit more space. The safety of the guests as well as the giraffes is key here making sure the giraffes feel secure in coming over and having positive interactions with guests.

If booked early enough, the manor can work with couples to make the stay even more special. And since this was an elopement they booked the Orchid room where you can have a private dinner. This allows couples to be fully away from the main house and other guests. You have one dedicated waiter for the night and the three courses served in the candle lit glass house. We just did a few photos here before the couple could then share in a private meal before getting an early night to wake up to the giraffes at the balcony.

An early morning rise at 6am saw the first giraffe, Kelly coming to the balcony to get some treats. With Emma and Kieran still in their sleep wear it was perfect to get a few photos of then wrapped in a duvet before they headed down to breakfast with the giraffes.

Our last few hours at giraffe manor saw us looking to get the famous breakfast photos with the giraffes poking their heads through the windows. This was a truly epic sight and even in photos is just does not look real! A complete fairytale moment and all unfolding in front of my camera!

We then waived goodbye to Giraffe manor. A truly epic adventure. The 24 hours flew bye and I could not believe it was over! We had one last adventure. Which was a mini safari trip and to the Bomas for the last few photos.

Giraffe manor and Kenya was a truly amazing adventure. I was so thankful to be able to go on this trip. Explore a new country i had not been with and arrive at the famous Giraffe manor. It really is something out of a fairytale. If you are thinking of going, then it really is worth it. and if you are considering eloping at giraffe manor or having a giraffe manor wedding then please think about taking me with you! I would love to explore this amazing place again!